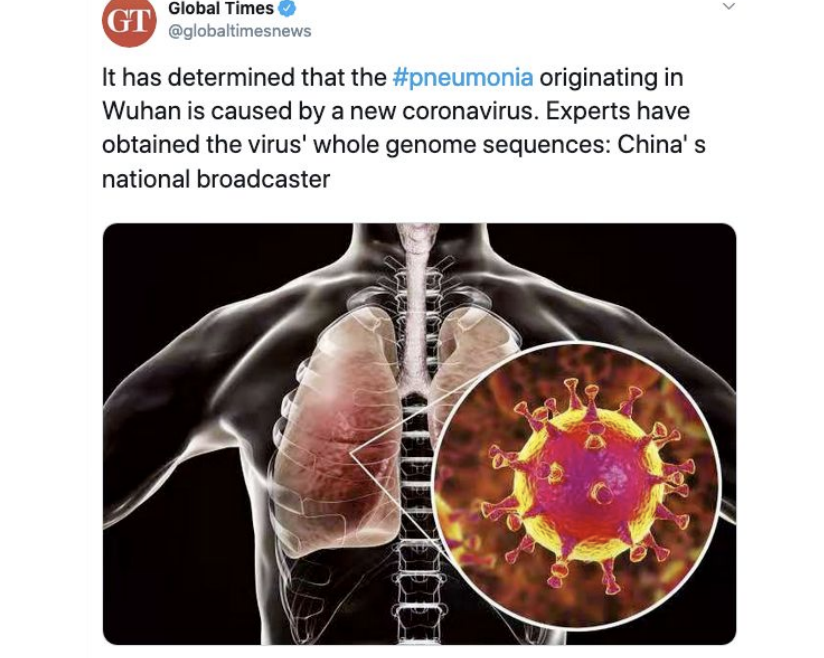 As news of a coronavirus outbreak in Wuhan, the capital of China’s Hubei province, began to appear in Western news outlets in January, the country’s state-run media initially struck a tone of reassurance and transparency with hashtags like #wuhancoronavirus and #wuhanpneumonia. By February, such messaging had disappeared.

According to a new report by cybersecurity firm Recorded Future, Chinese authorities have directed two abrupt shifts in the English language media it produces. The first shift skirted facts about the disease’s spread and origins in favor of social media posts that praised the response of the government and President Xi Jinping. Then, starting in late February, such posts took on a more aggressive tone, accusing the West of xenophobia and casting doubts on the virus’s origins.

The shift in message can be seen in the social media posts below, provided by Recorded Future. The first is from early January and the second from Feb. 29:

Both tweets are from Global Times, a Chinese propaganda account that has 1.7 million followers. According to Recorded Future, Global Times and other such media outlets—including Xinhua, People’s Daily, CCTV, and CGTN—have posted tens of thousands of coronavirus-related items on services like Twitter and Instagram.

Recorded Future’s account is consistent with a similar report published by news site Pro Publica last week, which describes a massive Twitter disinformation operation run by the Chinese government. Pro Publica claims the operation initially focused its attention on Hong Kong, but then shifted to a flood of coronavirus coverage. The publication also noted that the campaign appeared to be directed at Chinese expatriates and cited unnamed sources who said China was paying influential Twitter users to spread propaganda.

As for the earlier Chinese media messages describing the coronavirus spread in Wuhan, Recorded Future said “censors and propagandists had not yet communicated coordinated guidelines for foreign messaging by state-run media.”

Many of the Chinese propaganda outlets continue to publish on Twitter, despite reports of their promoting blatantly false information. A Twitter spokesperson said the company is aware of such accounts and, in some cases, is taking action against them.

“Using technology and human review in concert, we proactively monitor Twitter to identify attempts at platform manipulation and mitigate them,” said the Twitter spokesperson. “If we identify further information campaigns on our service that we can reliably attribute to state-backed activity either domestic or foreign-led, we will disclose them.”

All of this comes as the Chinese Communist Party attempts to portray its handling of the Wuhan situation as a success, and a model for other countries to follow. The country’s success in Wuhan is coming into question, however, as Bloomberg reports shared photos of thousands of funeral urns in the city—suggesting the actual death toll in Wuhan is much higher than the 2,535 fatalities authorities have stated. Meanwhile, the International Business Times has reported a soaring number of phone cancellations as evidence that the death toll in China owing to the coronavirus has been understated.

—How the coronavirus stimulus package would change gig worker benefits
—Inside the global push to 3D-print masks and ventilator parts
—Apple focuses on what’s next amid the coronavirus outbreak
—A startup is building computer chips using human neurons
—Listen to Leadership Next, a Fortune podcast examining the evolving role of CEOs
—WATCH: Best earbuds in 2020: Apple AirPods Pro vs. the Sony WF-1000XM3