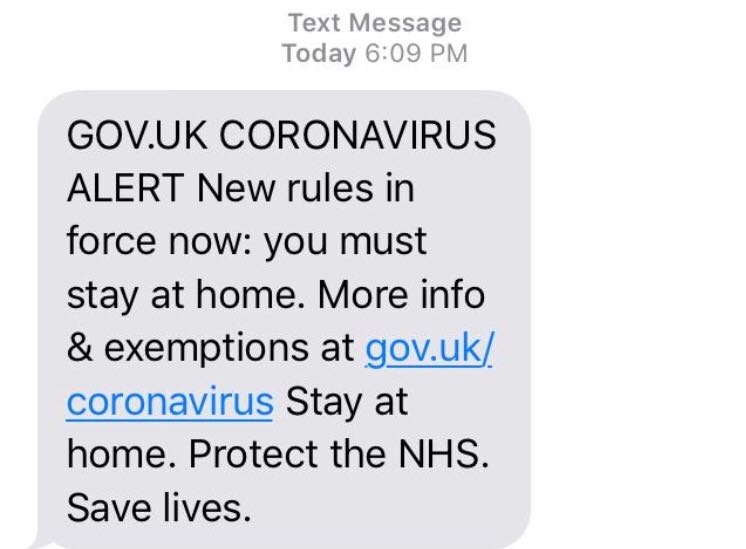 Citizens across the United Kingdom received the text message below on Tuesday, telling them to stay home and protect the country’s health service:

The UK is not the only country to turn to text messages to warn citizens about the danger of the coronavirus. In South Korea, news reports suggest text alerts by the government have been an integral part of that nation’s success in limiting the spread in the virus.

The U.S. government, meanwhile, has yet to send an despite a new system designed to contact nearly every Americans’ cell phone. The system, known as WEA for Wireless Emergency Alert, went live in 2018, but the White House has only sent one text, which read “Presidential Alert” and explained the message was just a test.

When it launched, the new texting tool provoked concern that a tweet-happy President may use it for political messaging or other non-critical information. Federal Emergency Management Agency officials, however, provided reassurance at the time that the WEA process included guardrails that required a genuine emergency such as “a natural disaster, act of terrorism, or … threat to public safety.”

The deadly coronavirus, which is quickly spreading across the U.S., may qualify as such an emergency. And a nationwide text from the federal government could help drive home the message for social distancing, which medical experts universally say is essential to slowing the crisis.

The White House declined to comment publicly about whether it would deploy the WEA system to warn American’s about coronavirus. The federal government has sent Americans a postcard-sized advisory about the virus, labeled “President Trump’s Coronavirus Guidelines for America.

In fact, the President initially downplayed the scope of pandemic and has since shifted to voicing support for a return to some semblance of normal despite the risk.

“Local authorities know best when emergency information is needed in their area and how best to communicate to people their jurisdiction. FEMA supports state and local officials providing assistance to help their messages appear as intended on cell phones, TV, and radio,” said the spokesperson.

As the coronavirus crisis deepens—New York State alone had 25,665 cases as of Tuesday with the rate doubling every few days—it appears likely people’s cell phones will light up with new alerts.

—The Supreme Court has shunned technology. Could coronavirus change that?
—What medical experts say about Everlywell’s home coronavirus testing kits
—TikTok’s newest viral influencers? Personal finance stars
—Privacy could be the next victim of the coronavirus
—Listen to Leadership Next, a Fortune podcast examining the evolving role of CEO
—WATCH: Best earbuds in 2020: Apple AirPods Pro Vs. Sony WF-1000XM3